Basing Control Limit on Fixed Values or Subsets of Data

You can select the Options item from the chart's right mouse menu, then the Control Limits tab to review the various methods available for specifying how the control limits are calculated for each region. By default all the groups within the region are used; however in some cases it is desirable to base the limits on an initial sample of 50 subgroups (for example), or to test if the data reflects a process with a stated mean and process sigma. Note that you define each region's control limit method separately. For example, in the dialog box shown below, the calculations are being specified for the region containing subgroups 1 through 40 (since that region is selected in the Subgroup Regions list at the top of the dialog box). To specify the control limits for the second region, containing groups 41-47, select that region from the Subgroup Regions list.

You can also use the Edit button to the right of the Subgroup Regions list to edit the groups included in the region. (Note that regions must be continuous). Use the Delete button to remove the selected region from the chart; use the Add button to create a new region, which produces the same effect as described earlier by grabbing the subgroups using the mouse button in the chart window. 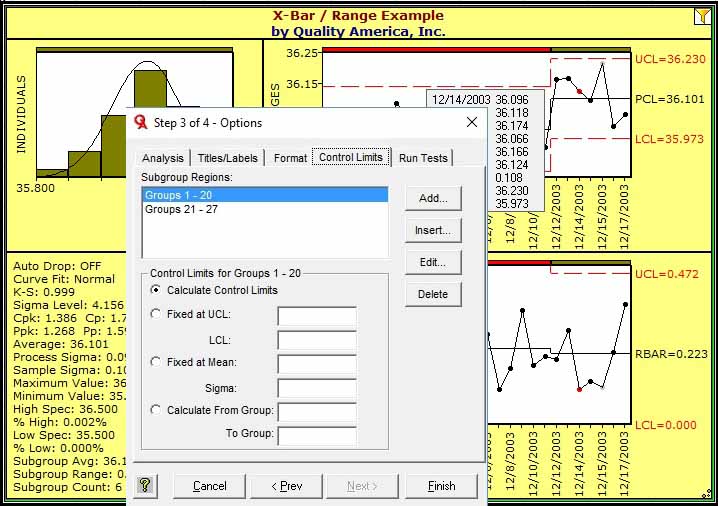 Quality America offers Statistical Process Control software, as well as training materials for Lean Six Sigma, Quality Management and SPC. We embrace a customer-driven approach, and lead in many software innovations, continually seeking ways to provide our customers with the best and most affordable solutions. Leaders in their field, Quality America has provided software and training products and services to tens of thousands of companies worldwide.