Plotting as an Analysis Tool

Drive for Show, Putt for Dough....except for the PGA?

As any weekend golfer will tell you, the mantra often heard around the green is "Drive for Show, Putt for Dough" - which of course serves as a reminder to all fledgling duffers that in order to reduce your strokes you must focus on your short game.

While we would not argue the validity of that advice, we were curious to find that Tiger Wood - considered maybe the best golfer of all time - ranks in the bottom of the pack (#140 out of 179) in the PGA tour for putting. What gives?

Using the Quality America SPC IV Excel add-on with some basic MS Excel functionality, we examined the statistical correlation of the average score (i.e. average number of strokes per round) of the top players against other key measures.

To test the adage, we looked for correlation between the Average Number of Putts per Hole and the Average Number of Strokes per Round (i.e. your Score). As shown in the Scatter Diagram below, only 33% of the variation in Strokes is explained by the variation in Putts. (By the way, Tiger is the lone point considerably below the rest at (1.80, 69.5). That is, most golfers who putt the way Tiger does would have scores averaging 71.7). 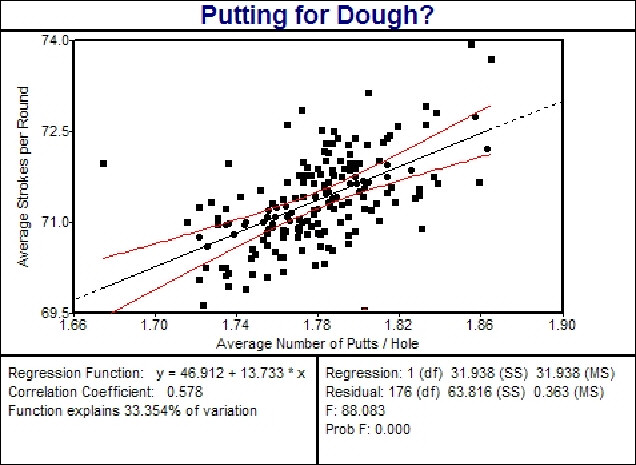 We looked at several other potential factors using Scatter Diagrams, and found results shown in the table below.

According to this analysis, GIR (Greens in Regulation - the ability to be on the green in 1 stroke for a Par 3 hole, 2 strokes for a Par 4 hole, and in 3 strokes for a par 5 hole) had the biggest effect, followed by the Average Number of Putts per Hole.

The Regression function in the MS Excel Data Analysis Tools allowed a multivariate analysis, which confirmed some of our Scatter Diagram analysis. The following factors, shown with their coefficients in the prediction model, were shown to be significant at greater than the 99% level. (Avg. Driving Distance was the least significant):

Note that this model accounted for 80% of the variation in the Scores. Interestingly, the % Birdies was not significant, although further analysis shows that Putts were highly correlated (72%) with Birdies, and Putts were significant. Furthermore, the model changed little if Tiger is excluded from the analysis.

We cannot directly compare the coefficient values to estimate their relative contribution to the Score, since each of the factors have different magnitudes and scales. Instead, we can use the SPC IV Excel Box-Whisker chart to show the Contributions.

This analysis shows that Distance, Driving Accuracy and Bunker Saves contribute little to the Score, since their contributions are near zero. Conversely, GIR and Putts contribute heavily to Score, with average contributions of approximately -9 and + 21 strokes, respectively. Furthermore, the variation in contribution (as indicated by the distance between the whiskers for each factor: 2.5 Strokes for GIR and 2.2 Strokes for Putts) show that GIR is slightly more likely to yield competitive advantage. Incidentally, Tiger was just above the average contribution for putts (not a good thing), but below the lower whisker value (minus three sigma) for GIR. A statistical stand-out! 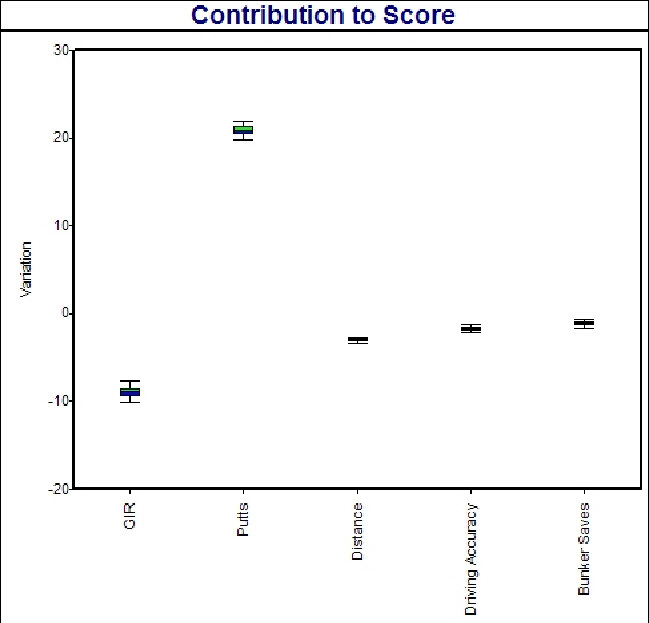 Although there are probably other factors (including interactions and environmental effects) that might improve this model, it would seem that getting on the green has at least as much, if not slightly more, influence towards improving your score than putting. By the way, although Tiger ranks only 140 in putting, he is #1 in hitting Greens in Regulation.

Maybe the mantra should be "Drive for Show, Putt for Dough, but Hit the Grass to Max the Cash". Keep them in the middle!

Charts generated by SPC IV Excel. It is so easy to use you probably already know how!


Learn more about the Regression tools in Six Sigma Demystified (2011, McGraw-Hill) by Paul Keller, in his online Regression short course (only $99), or his online Black Belt certification training course ($875).