Deming on Management of People

Difference between TQM and Six Sigma

Process Improvement through Root Cause Analysis

Process Improvement through Root Cause Analysis

The occurrence of special cause variation, evidenced by out of control or run test violations, provides indication that the process location or variation has changed, depending on the chart. The special cause provides two critical pieces of information: The process location (or variation) has changed, and the time frame the change was detected. As shown in Figure 1.9 and Table 2.2, process shifts are not necessarily detected as soon as they occur, depending on the type of chart, its sample size and frequency, and the size of the shift. Therefore, the timing of the process shift indicated by the control chart may be delayed from when the process shift actually began. This is an important consideration when brainstorming potential causes of the shift.

Sometimes, rigorous brainstorming of the possible root cause of a process shift can lead to identification of the source. The outcome, or effect, is often stated in terms of the problem experienced to aid the brainstorming. It is convenient at times to categorize the potential causes using the 5M and E or 4 Ps to ensure that all areas are considered:

Brainstorming should include the key process stakeholders, including those that operate the process on a daily basis, process experts or support personnel, and perhaps even those who supply product or operate processes that feed into the process under investigation. Subtle changes to processes or their feeder processes, seemingly benign to those responsible, are sometimes the culprit. 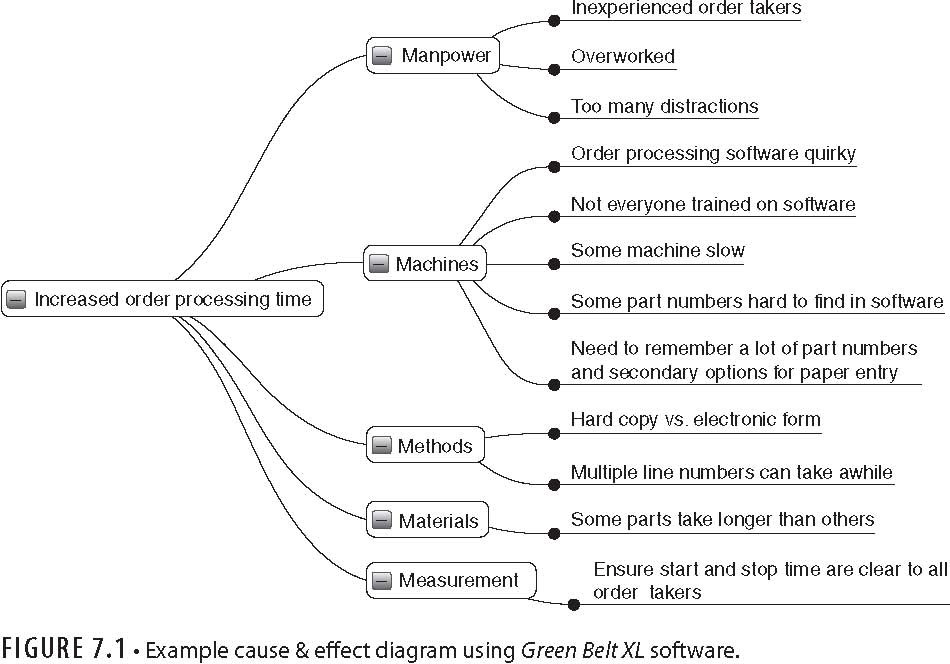 Obviously, most internal or external supplies would not knowingly make changes that would certainly impact their customers. Similarly, process personnel would not engage in manipulating the process unless they felt the change insignificant (or on the contrary significant and beneficial) to the end result. It is thus paramount to engage internal and external suppliers and process personnel in a positive manner, with no fear of retribution. Engaging these personnel is a critical first step toward building buy-in, which precedes any meaningful contribution toward process improvement.

In simple cases, the source of the special cause can be quickly identified and addressed: a procedure not followed; a worker untrained in a particular aspect of the process; inconsistent material from a supplier; a sudden change in environmental conditions. Other times, the source of the special cause variation requires further investigation, as is often the case when trying to identify significant sources of common cause variation.

As a result, the process changes necessary to reduce these forms of special cause variation and almost all forms of common cause variation are themselves significant. As such, they demand sufficient management buy-in to allocate necessary resources and encourage cross-functional participation. A proper Six Sigma project, sponsored by management and executed by a cross-functional team of stakeholders led by a Black Belt trained in statistical problem solving, is perfectly suited to address these issues (Keller, 2011).

An overview of the techniques used to understand the sources of variation follows. A detailed discussion of the quantification of error attributable to measurement systems is found in Chapter 8.

(Web editor note: The chapter goes into detail on the use of Stratification techniques (such as using Box-Whisker and Pareto Analysis), Regression Analysis and Designed Experiments. The chapter concludes as follows).

Simple stratification and enumerative techniques such as box-whisker and Pareto diagrams can be used to suggest possible process factors contributing to variation. Happenstance data available from process operations often lacks the clarity to reach meaningful conclusions. Multiple regression analysis used with experimental design techniques offer a simple and a quick means to determine the significance of factors in any process. In the example above, the 16 experimental runs provided much more information than was available in the 146 happenstance process observations (which actually provided more misinformation than information). In this way, a seemingly complex process with many variables is reduced in scope to only a few significant factors that contribute most to the process variation.