What does the term "Six Sigma" stand for

Is Your Process Performing

As Six Sigma becomes more mainstream in Fortune 500 companies, many small to mid-sized companies are asking if a Six Sigma deployment is right for them.

Six Sigma offers many small and medium sized companies the same benefits as larger companies: an improved bottom line. Most companies today operate between three and four sigma, where the cost of quality is 15 to 25% of revenue. (See graph below). As the company moves to Six Sigma Quality Levels, their Cost of Quality decreases to one to two percent of revenue. 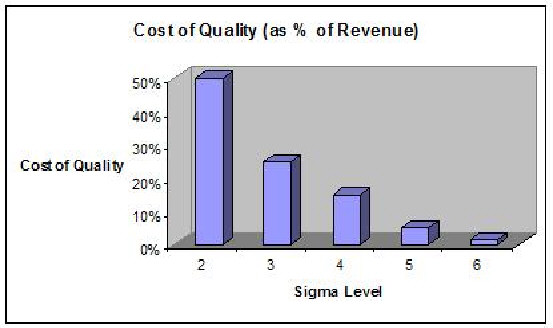 The deployment for large or small organizations share many of the same strategies. At the Executive level, the infrastructure is developed to support the on-going Six Sigma program. The problem-solving DMAIC approach is applied to understand the current conditions relative to stakeholder (customer, shareholders and employees) needs, and organizational support systems are established to provide exposure and endorsement as well as on-going Project Selection and Sponsorship. Larger scale projects are broken down to Black Belt projects aligned with the strategic objectives relative to cost or revenue, schedule, and/or quality.

Six Sigma Projects, led by a Black Belt, become the means by which the strategic objectives are attained. A given Black Belt may work several projects at a time, and complete a half dozen projects in a given year. A good rule of thumb is that the mature Six Sigma organization will develop about 1% of their work force as full-time Black Belts, although it is not uncommon to start with about 0.5%. In this way, the deployment is effectively scaled based on the number of employees. Company culture, organizational structure and facility location may also influence the number of Black Belts. For example, Black Belts may be selected so that the needs of each facility, or each segment of the business, are adequately met.

A critical challenge for any organization in deploying Six Sigma is resource allocation: Our people already feel overworked. Since smaller companies tend to have flatter organizational structures, with a high percentage of unskilled labor and just a few highly-skilled support personnel, even a few Black Belt (using the half percent guideline) may be a significant expense in proportion to the total labor budget. The training need may be increased, as may the need for consulting expertise to serve as Master Black Belts. Finally, employees in smaller organizations learn to wear many hats, usually because each function can not be cost-justified as a full-time position. Many of these functions are critical to the daily operations, as well as the longer-term survival of the firm. Managers may question how they can afford to "lose" key people to the Black Belt role.

The response to these issues is the realization the Six Sigma program will very quickly pay for itself. When you consider that 25% of revenue is wasted in a three sigma organization, it is clear there are tremendous opportunities. You might argue that many of these opportunities exist simply because of resource constraints: people know the problem exists, have some understanding of potential solutions, yet lack the time to investigate and deploy the best solution. Only by diverting, or adding, resources to the system can we reduce the waste and improve profitability. Management, particularly mid-level management, must be committed to keeping the resource allocated to the project to realize its potential. Daily operational issues will sometimes take the back seat to the Six Sigma improvement project.

There can also be advantages of Six Sigma in smaller organizations. In larger organizations, fear and turf battles can slow progress, unless a concerted effort is made at the onset to identify and address these cultural issues. Often, cultural issues are less entrenched in a smaller work force. There can be greater teamwork, less in-fighting between functional areas, and better appreciation of management simply because people are forced to work with one another in closer settings. These factors help build trust as the organization makes significant changes, first in initiating change, then in implementation. Since employees tend to wear many hats, they can have a better understanding of the internal complexities of the organization. This helps achieve system optimization rather than simple process improvement. Smaller organizations, by necessity as well as design, are often much more agile in responding to changing circumstances. This provides an ideal environment for initiating the Six Sigma approach. A properly designed and deployed Six Sigma program will provide financial benefits that quickly overwhelm the costs.