What does the term "Six Sigma" stand for

Is Your Process Performing

For Motorola, the originator of Six Sigma, the answer to the question "Why Six Sigma?" was simple: survival. Motorola came to Six Sigma because it was being consistently beaten in the competitive marketplace by foreign firms that were able to produce higher quality products at a lower cost. When a Japanese firm took over a Motorola factory that manufactured Quasar television sets in the United States in the 1970s, they promptly set about making drastic changes in the way the factory operated. Under Japanese management, the factory was soon producing TV sets with 1/20th the number of defects they had produced under Motorola management. They did this using the same workforce, technology, and designs, making it clear that the problem was management. Eventually, even executives within Motorola had to admit 'our quality stinks,' (ref: Jeremy Main, Quality Wars: The Triumphs and Defeats of American Business, The Free Press, 1994, 173).

Finally, in the mid 1980s, Motorola decided to take quality seriously. Their CEO at the time, Bob Galvin, started the company on the quality path known as Six Sigma and became a business icon largely as a result of what he accomplished in quality at Motorola. Today, Motorola is known worldwide as a quality leader and a profit leader as well as the prominent Six Sigma originator in business. After Motorola won the Malcolm Baldrige National Quality Award in 1988 the secret of their success became public knowledge and the Six Sigma revolution was on. Today it is hotter than ever.

It would be a mistake to think that Six Sigma is about quality in the traditional sense. Quality, defined traditionally as conformance to internal requirements, has little to do with Six Sigma. Six Sigma is about helping the organization make more money. To link this objective of Six Sigma with quality requires a new definition of quality. For Six Sigma purposes I define quality as the value added by a productive endeavor. Quality comes in two flavors: potential quality and actual quality . Potential quality is the known maximum possible value added per unit of input. Actual quality is the current value added per unit of input. The difference between potential and actual quality is waste. Six Sigma focuses on improving quality (i.e., reducing waste) by helping organizations produce products and services better, faster and cheaper. In more traditional terms, Six Sigma focuses on defect prevention, cycle time reduction, and cost savings. Unlike mindless cost-cutting programs which reduce value and quality, Six Sigma identifies and eliminates costs which provide no value to customers: waste costs.

For non-Six Sigma companies, these costs are often extremely high. Companies operating at three or four sigma typically spend between 25 and 40 percent of their revenues fixing problems. This is known as the cost of quality, or more accurately the cost of poor quality. Companies operating at Six Sigma typically spend less than 5 percent of their revenues fixing problems (Figure 1). The dollar cost of this gap can be huge. General Electric estimates that the gap between three or four sigma and Six Sigma was costing them between $8 billion and $12 billion per year. 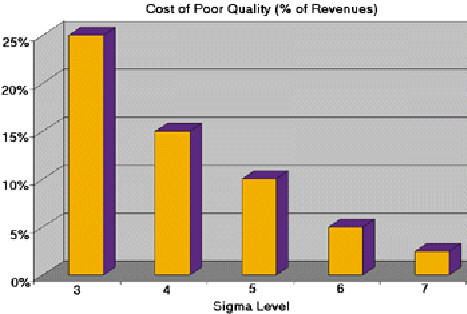 What is Six Sigma?

Six Sigma is a rigorous, focused and highly effective implementation of proven quality principles and techniques. Incorporating elements from the work of many quality pioneers, Six Sigma aims for virtually error free business performance. Sigma, s, is a letter in the Greek alphabet used by statisticians to measure the variability in any process. Performance of the company is measured by the sigma level of their business processes. Traditionally companies accepted three or four sigma performance levels as the norm, despite the fact that these processes created between 6,200 and 67,000 problems per million opportunities! The Six Sigma standard of 3.4 problems per million opportunities is a response to the increasing expectations of customers and the increased complexity of modern products and processes. (Statisticians note: the area under the normal curve beyond Six Sigma is 2 parts-per-billion. In calculating error rates, Six Sigma presumes that over the long term processes will drift by as much as 1.5 sigma. Thus, you will find 3.4 PPM is the area beyond 4.5 sigma on the normal curve).

If you are looking for new techniques, do not bother. The magic of Six Sigma is not in statistical or high-tech razzle-dazzle. Six Sigma relies on tried and true methods that have been around for decades. In fact, Six Sigma discards a great deal of the complexity that characterized Total Quality Management (TQM). By the count of one expert, there were over 400 TQM tools and techniques. Six Sigma takes a handful of proven methods and trains a small cadre of in-house technical leaders, known as Six Sigma Black Belts, to a high level of proficiency in the application of these techniques. To be sure, some of the methods used by Black Belts are highly advanced, including the use of up-to-date computer technology. But the tools are applied within a simple performance improvement model known as DMAIC, or Define-Measure-Analyze-Improve-Control. (This performance improvement model is analogous to the older TQM model known as PDSA, or Plan-Do-Study-Act).

DMAIC can be described as follows: