Area Under the Standard Normal Curve

Non-Normal Distributions in the Real World

Critical Values of the t Distribution

The following is an excerpt from The Quality Engineering Handbook by Thomas Pyzdek, © QA Publishing, LLC.

The central limit theorem can be stated as follows:

It can also be shown that the average of sample averages will equal the average of the universe and that the standard deviation of the averages equals the standard deviation of the universe divided by the square root of the sample size. Shewhart performed experiments that showed that small sample sizes were needed to get approximately normal distributions from even wildly non-normal universes. Figure IV.3 was created by Shewhart using samples of four measurements. 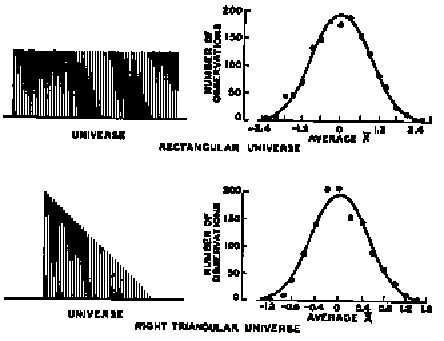 From Economic Control of Quality of Manufactured Product, figure 59. Copyright © 1980.


Learn more about the Statistical Inference tools for understanding statistics in Six Sigma Demystified (2011, McGraw-Hill) by Paul Keller, in his online Intro. to Statistics short course (only $89) or his online Black Belt certification training course ($875).