Figure 5.6 shows a process that at first glance might suggest a reduction in process variation as the cause of the subgroups hugging the X chart’s centerline. Yet, the range chart shows no evidence of variation reduction. 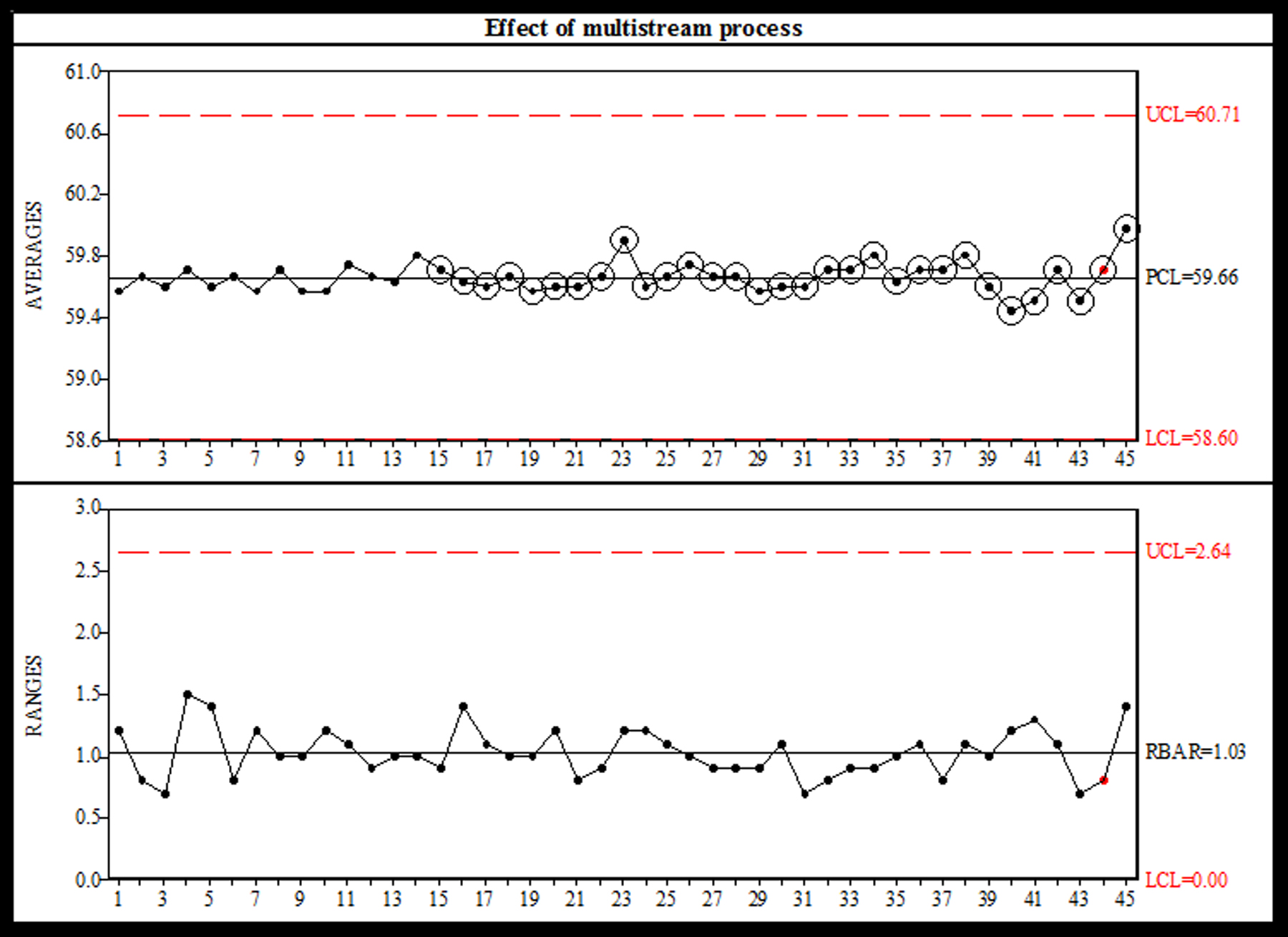 This data, provided by a major cosmetic manufacturer, represents the fill weight for bottles of nail polish. The filling machine has three heads, so subgroups were conveniently formed by taking a sample from each fill head at a given point in time. The problem (that this control chart helped identify) is that the fill heads have statistically significant differences in their average values, in this case due to pressurization issues. This variation between fill heads is reflected in the within subgroup variation (as plotted on the range chart), which is much larger than the variation between the averages weight of the three fill heads (represented graphically by the pattern of the plotted points on the X chart). Since the X chart control limits are calculated based on the range chart, they are much wider than the variation in plotted subgroup averages.

The underlying problem is that the premise of a rational subgroup (defined in Chapter 2) has been violated: each subgroup contains output of multiple process streams rather than output of a single, stable process. Yet, the chart excelled as a learning tool: the fill heads are different, and overall variation could be reduced by making them more similar. Note the circles that highlight subgroups 15 and on. The software has indicated a violation of run test 7 (15 points in a row within 1 sigma of centerline), which was developed to search for this type of irrational subgroup. The implication of the run test first occurring with group 15 is that all data beginning with group 1 are impacted by this rational subgroup issue.

Multi-stream behavior is not limited to cosmetic filling operations. Multiple head filling stations for beverages, food products, and chemicals; multiple cavity molding operations; and multiple piece fixtures for machining are similar examples. Transactional processes can also experience irrational subgroup formation due to multiple stream processes. Consider a call center supervisor who constructs subgroups based on a selection of 5 employee’s response times. If the response times consistently differ for one or more of the employees, such as due to their experience level, the subgroup is irrational.

In cases where the multiple stream effects cannot be eliminated, a modification of the X chart is recommended. A batch means chart, available in some advanced SPC software, accommodate the multiple stream process by converting the X chart into a simple x chart (discussed in Chapter 6), where the plotted value is the subgroup average. The range chart is maintained to provide estimate of the within subgroup variation: in this case the between stream variation. Special causes disrupting the stream to stream differences would be noted as out of control on the range chart. The x chart monitors the overall average of the multiple streams, providing indication of the process location. The only difference between the batch mean and the standard X chart is the control limits, which are calculated based on the moving range between the subgroup (multiple stream) averages. This follows the general approach for n = 1 individuals data for the standard x chart (discussed in detail in Chapter 6). 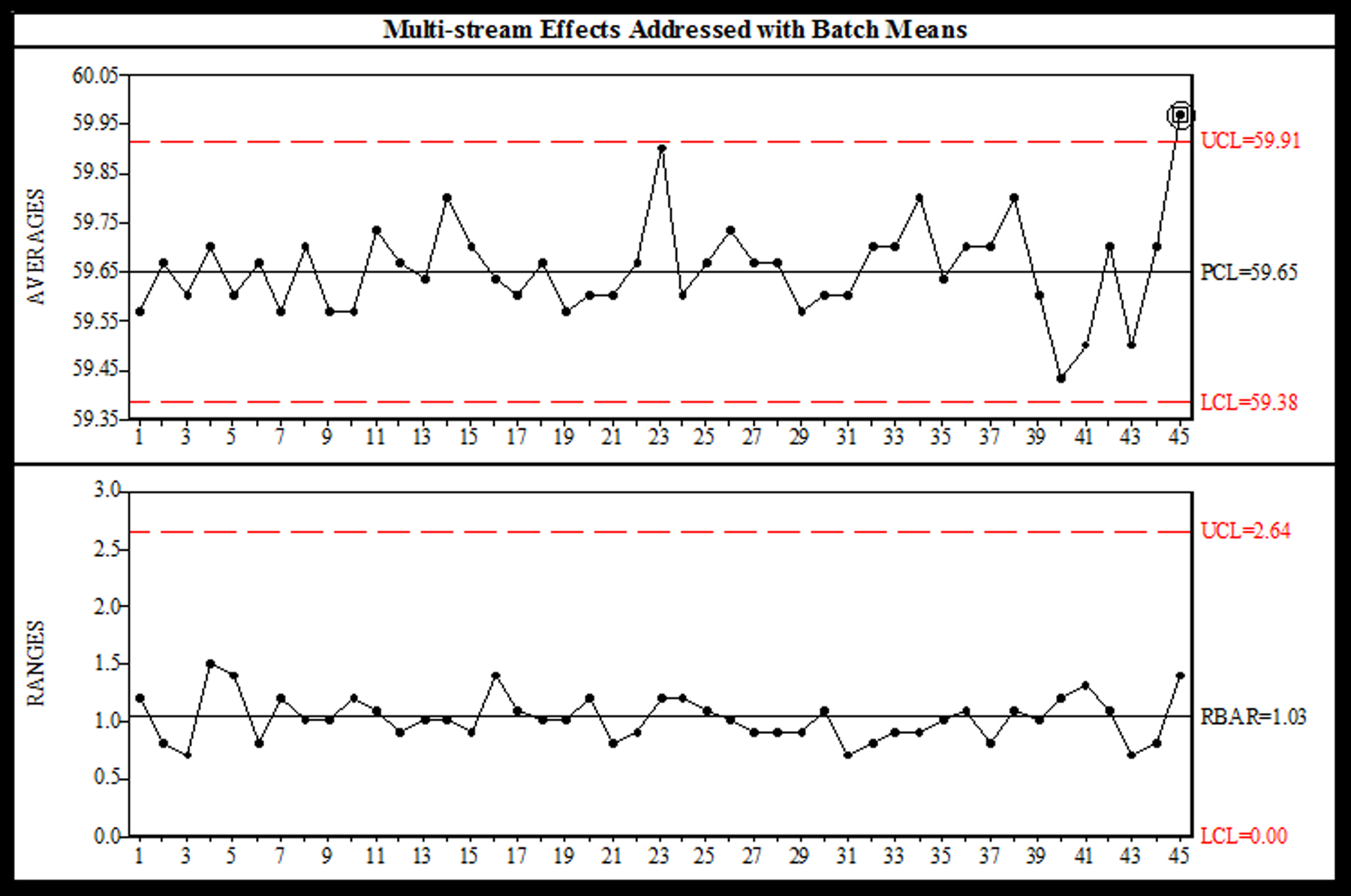 Figure 5.7 shows the batch means chart for the data previously presented in Figure 5.6. Note the range chart is unchanged from Figure 5.6. The plotted groups on the X chart are also unchanged. The control limits on the X chart are calculated based on the short-term variation between subgroups, as is done on a standard x chart for individuals data. A change in the average output of the multiple streams is now evident on the batch means x chart, indicated by an out of control condition at group 45.

Figure 5.8 provides a revised batch means chart with a new control region beginning at group 45 to accommodate the process shift. 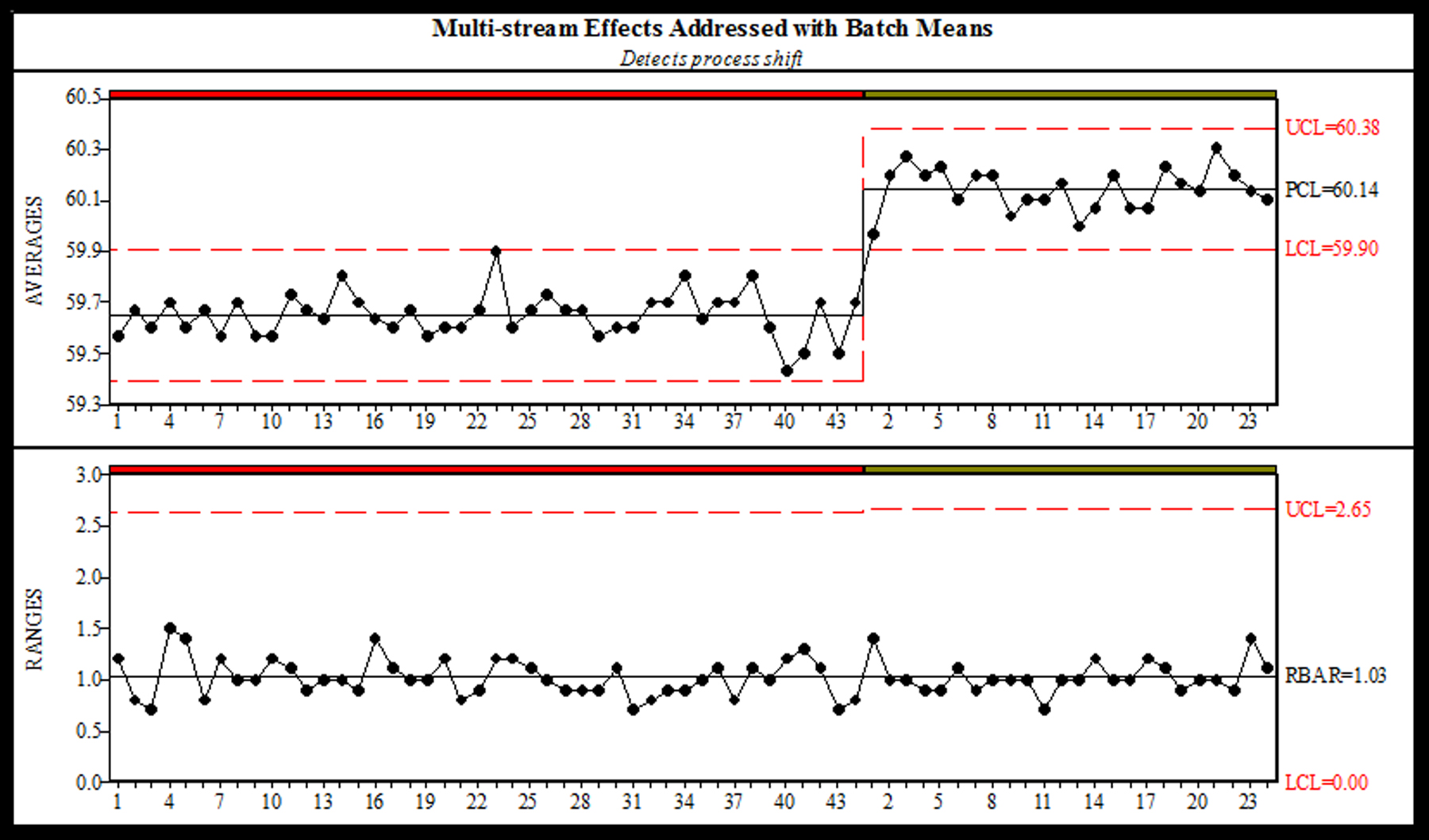 (Web editor note: The section goes on to discuss other Subgroup Formation Concerns, including process autocorrelation and short run applications).