by Paul A. Keller, CQE, CQA

Run Test 7, discussed in a recent column on Run Test Rules, is a bit different from most of the other Run Test Rules. A brief description of these rules, and their meaning, is also provided elsewhere in the Knowledge Center: Interpreting Run Test Rules.

The following X-Bar chart, printed in Internet-friendly JPEG format from the Quality America SPC-PC IV software, shows a process affected by Run Test 7: 15 Successive Points within 1 Sigma of Centerline. The Zone Lines (sigma levels) have been shown for convenience, but are generally turned off since SPC-PC IV automatically checks for violations of each of the applied Run Tests (or user-defined tests) each time a new subgroup is added. The control limits are calculated, in this case, using all the plotted data with a subgroup size of 3. Each of the circled subgroups in the chart are in violation of Run Test 7. 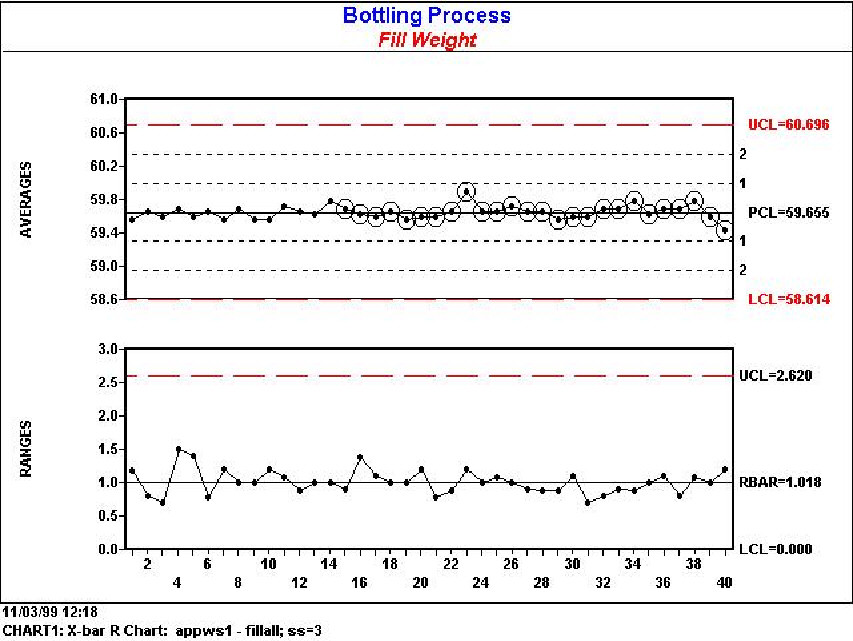 At first glance, you might suspect that the cause of this Run Test violation is a process improvement: the process standard deviation was decreased. But, as is evident in the Range chart, there is no reduction in the process variation.

What causes the points on the X-Bar chart to hug the centerline?

This data, provided by a major cosmetic manufacturer, represents the fill weight for bottles of nail polish. The filling machine has 3 heads, so subgroups were conveniently formed by taking a sample from each head.

The problem is that the heads in the filling machine apparently have significantly different average values. This variation between filling heads causes the within subgroup variation (as plotted on the Range Chart) to be much larger than the variation in the subgroup averages (represented graphically by the pattern of the plotted points on the X-Bar Chart). The X-Bar Chart control limits, which are calculated based on the Range Chart, are thus much wider than the plotted subgroups.

The underlying problem then is that the premise of a Rational Subgroup has been violated: we tried to construct a subgroup out of apples and oranges. But all is not lost (fruit salad is not so bad): we have learned something about our process. We learned that the filler heads are different, and that we could reduce overall variation by making them more similar.

This type of multi-stream behavior is not limited to cosmetic filling operations. Subgroups formed from different locations on a warped fixture, different product lines Consider the potential for irrational subgroups in these processes:

·      A bank supervisor is trying to reduce the wait time for key services. She constructs a control chart, using subgroups based on a selection of 5 customers in the bank at a time. Since she wants to include all the areas, she makes sure to include loan applications as well as teller services in the subgroup.

·      An operator finish grinds 30 parts at a time in a single fixture. He measures 5 parts from the fixture for his subgroup, always including the two end pieces. His fixture is worn, so that the pieces on the two ends differ substantially.

Sound familiar? Send me your stories and I will include the best in a later column.